This started out as a simple article about two players who’s Average Draft Position (ADP) were roughly 2-6 spots from each other, meaning you were only likely to grab one (I decided to use MyFantasyLeague.com and ESPN.com for my ADP figures). Then the research started…I thought I would browse ADPs and find players that were around one another in both and make a case for the one I liked. However, it quickly became apparent that  finding two sets of guys who were both being drafted near one another on both websites proved more than a little difficult. So to clear all this up I’ll be doing two versions of this post (and I hate to mix sports metaphors) to cover all my bases. So here is the ESPN version. 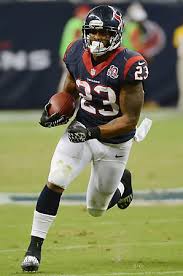 Doug Martin (14) and Arian Foster (11) – Somehow this is a thing…Doug Martin is on average going 14th overall with Foster going 11th. If you’re in a 12 team league on ESPN you probably don’t have a shot at nabbing both. However, I can put this to bed quickly, you want Foster. In my own ranks (updated today) I have Martin moving from 19th outside my top 20 at 25, and Foster is my #7 RB and couldn’t possibly fall past #10. With the news of Carl Nicks being released from the Bucs I can’t see Martin being a guy you would have any confidence starting. Foster on the other hand is the bell cow in Houston where they’ve taken steps to upgrade their line. One last thing: Pro Football Focus graded the Texans 12th overall at run blocking while the Bucs finished 5th worst. And that was before they lost Zuttah, Joseph, and Nicks. Plus, it’s hard not to want to draft a guy who is just trying to be the best teammate possible.

Trent Richardson (53) and Andre Ellington (50) – Going back to Pro Football Focus here: Andre Ellington had 5 games last season where he didn’t get a positive rushing grade from PFF, in comparison Trent Richardson had five games where he DID receive a positive rushing grade. Just to put that all together, on the season Richardson finished with a -5.7 (-6.1 rush) and Ellington +13.9 (7.6 rush). With a coach that has more confidence in him, a vastly upgraded offensive line, and a markedly increased workload coming up, it seems like a no brainer that Ellington should be surpassing Richardson on your draft day boards.

Joique Bell (73) and Sammy Watkins (70) – Sammy Watkins didn’t have a single reception in the Hall of Fame game!!! That means he’s the biggest bust in Buffalo Bills history RIGHT? Yeah this might as well be the reaction when people even bother writing about preseason stats. I’ve been saying for a while now that I like the value Robert Woods gives you, if you’re going to be drafting a Bills WR. I can’t recall a single mock where I’ve grabbed Watkins and neither should you. Joique Bell however provides exceptional value at his current spot. With Mike Lombardi in Detroit most are predicting a Pierre Thomas type role for Bell. While I don’t like assuming Lombardi is transferring everything from New Orleans I can safely say that it doesn’t matter. Bell finished 16th last year in scoring at RB and no matter what the system, he is poised for more work. You can (and should) wait on an RB2 this year and when you do, make sure you get Bell.

Tavon Austin (143) and Jeremy Hill (147) – I can’t figure out why everybody loves Tavon Austin. Sure he’ll go off and win you two or three weeks, but that doesn’t matter when he scores zero points and loses you another 7. And yes, 7 was the number of times Austin went out and put up a goose egg. Maybe that number will drop to 5 this year… Then there’s Jeremy Hill. I said on the last pod that BJGE finished 30 at RB last year, so I think it’s more than safe to assume that is the floor when we’re talking about Hill, who will inherit the Law Firm’s role and then some this year. Hill is a must own handcuff for Giovani Bernard owners this year and will even pay off if you don’t own have the standout of last year’s Hard Knocks. I wouldn’t be shocked to see Hill’s name in the top 25 finishers at RB by the end of the season.