What Will Josh Gordon Do Next? 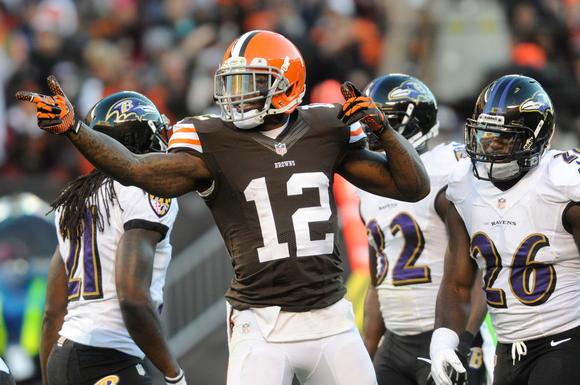 Who needs a ref? Signaling first downs will be a large part of what Gordon does from now on.

The single biggest surprise of the 2013 fantasy football season was Josh Gordon. It’s not even that the numbers don’t lie when it comes to complimenting his feats. It’s finding the right ones to properly display just how effective he was. He was the top scoring wideout and missed two games due to a suspension. Out of the 14 games he did participate in he had ten games where he scored double digit points. 7 games where he topped 100 yards. 2 games where he topped 200. And to top it off 9 TDs. All of this was done with a revolving door at QB, no discernible running game, and no other legitimate receiving threat on the outside which meant that teams were throwing their best corner at him every week (not to mention having a safety and a nickel corner rolled to him as well).

So what should be the expectation level of owners looking to potentially sink a first round pick into the savior of a perpetually doomed Browns franchise? Well, I’m here to say that we can expect more of the same. How can he follow that up though? Well luckily this is a case of a budding superstar having the right pieces around him to optimize his talents. I’m of course speaking about Norv Turner. Say what you want about him and weather or not you think he makes a competent head coach, the guy makes his top wide receiver a stud. We go back all the way to Turner with the Cowboys back in the 90s and you’ll notice that once Turner was the offensive coordinator Michael Irvin never dipped lower than second in the league in receiving yards at the end of the year. You see what he did for the career of Vincent Jackson and now he has the ridiculously fast Gordon at his disposal. Nobody knows how long Turner will be the offensive coordinator of the Cleveland Browns but we do know that as long as he is, Josh Gordon will be a fixture on championship fantasy teams.

Here’s why it might just get better for the guy. The Browns are almost certainly going with either a QB or a RB in the draft this year. While i’m not a Browns fan myself I think it should be a running back because I really liked what I saw from Brian Hoyer in his limited time on the field before sustaining a crushing injury that cut short a promising season. Should they go with a rookie QB Turner will make it abundantly clear to the young man that his success is tied to giving Gordon the ball. The only thing that concerns me with the Browns drafting a QB is that he will have to adjust to the game speed in the NFL. If there is any sort of adjustment period it will almost certainly impact Gordon’s numbers. However, if the Browns go with the running game in the first few rounds it will give defenses something else to think about when facing the Browns. Yeah 8 men in the box isn’t something the Browns are probably going to see next season but having at least some threat in the run game will only serve to help Gordon.

So what does the stat line look like for Gordon next year? Another 1,600 yard season is more than doable since he has shown that he is essentially both matchup and QB proof. If there is a solid run game in Cleveland he will certainly be able to hit double digit touchdowns. Let’s face it, when the Jets held Gordon to a mere 97 yards it was lauded as a shutdown effort by Dee Milliner. That is when you know you are dealing with greatness, when 97 yards is considered a shutdown.

With an increasingly talented defense and an early draft pick in addition to Gordon the future certainly seems bright in Cleveland. As they search for a head coach one can only hope that Ken Wisenhunt is hired and that Gordon is deemed unstoppable by the NFL and awarded an automatic 100 yards per game…which having Turner and Wisenhunt at the helm might as well be the same thing.

Think I missed the mark on this one? Have some concerns on certain factors that might effect Gordon next year? Comment below or tweet me @TheFantasyForce and I’ll put those concerns to bed. I’ll also be taking requests on which player you want covered next and any questions you may have. Until then enjoy the playoffs and tell your friends about The Fantasy Force!

5 Responses to What Will Josh Gordon Do Next?