I’ll never forget how her hair looked in the sun, the way it shined. It was March 22nd, 2011. I skipped a day of classes at school and got together with a friend in New York City as she was finishing up with a job interview. She met me in Grand Central Terminal when I got off the train and after a hug and some chit chat we made the decision to head out in search of that most essential of beverages: coffee. Finding a surprisingly not so packed Starbucks we sat down and talked about how long it had been since we’d seen each other, how her interview went, and how excited we were to spend some time together after not seeing each other for a long while.

Having no real plan for the day, after leaving with caffeine coursing through our systems we hopped on a subway and headed towards the Chelsea district. We ended up exiting a few stops early and decided to head to Union Square Park so we could engage in one of our all time favorite activities: people watching. Finding a spot on some steps we sat and talked about how school was going for me, how work was going for her, and how the mutual friend who introduced us was doing.

Now at this point I should tell you that I was occasionally only half listening to what she was saying. This is because I just couldn’t stop looking at her. We hadn’t hung out sometime north of 4 months, and I remembered that she was attractive, but sitting down with her, talking about life, and laughing at terrible jokes we both made, I noticed how stunning she was. And that hair. She was a redhead and there was just something about the way the sunlight was catching it.

We were just friends and any time either one of us made a move it was met with reproach by the other. But something felt different this time. After a little internal debate I decided I was going to go for it. I slid in a little closer, waited for a chance, and went for it. Absolute magic. Fireworks went off, people started cheering, and confetti fell from the sky…or at least that’s what happened in my head.

We spent another 6 hours together that day. I walked her back to Grand Central where she got on a train back to Connecticut. The train hadn’t yet pulled out of the station when she texted that she missed me.

To move all this along I’ll speed it up here. Fast forward 6 months later and we’re both rude to each other when we text…if we remember to. Phone calls don’t go past 15 minutes before someone hangs up abruptly in anger and frustration. The writing was on the wall for a while before she ends it. We don’t speak anymore.

And for a while there I just couldn’t realize how something so great went off the rails so quickly. I struggled with it for a long time and never came up with a satisfactory answer. I still haven’t. And for whatever reason it took a long time for me to let that go and move on.  Sometimes things just don’t work out like they once did on paper.

Fantasy owners know this feeling well. We see something on paper and it looks amazing, be it our rosters immediately after the draft, the depth chart status of a sleeper by week 1, or a cakewalk matchup to be exploited against a weak opponent. But sometimes, they just don’t work out. And it happens to writers too, sometimes what we see happen in training camp, preseason, and media statements just don’t play out how we expect it.

So now I’m moving on from some players (or notions) I was once enamored with.

Cam Newton as a Top 5 QB: If there’s one positive to this (and there really isn’t) it’s that you didn’t give up a ridiculously high pick to get SuperCam. And I was a HUGE advocate of drafting him, and I was VERY wrong. The cracked rib was really the alarm here. Cam has a good arm, not great, but good. His arm is made much more dangerous when paired with his running. We haven’t seen much of either this season and probably won’t until the later part of the year. Don’t bank on Cam getting you there.

The Justin Hunter Breakout: Oh man this one got me good. You hear the reports that he’s gotten bigger heading into camp so he can be more physical at the line: good start. The countless, “unstoppable goalline fade” pieces by reporters: building steam. The, “J-A-G” story in practice and his on field response to it: I’m all in. And then…nothing…well not quite nothing, after a heartbreaking first half in week one the Titans come out in the second half and immediately get a long distance connection from Locker to Hunter. The breakout is happening…But that now seems like more of a flash in the pan than a sign of dominance for a decade to come. Don’t worry though, if it doesn’t work out this year he’ll be on every writer’s, “Third Year Wideout Rule” list.

Cordarrelle Patterson being Josh Gordon: What’s worse than Justin Hunter being flat so far? A high upside WR, with a coach who knows what to do with him, an absolute breakout week 1…and then whoever has been on the field for the Vikings in that #84 jersey the past 3 weeks. There’s a chance I bench CPatt this week in a league where I have 2 flex spots in addition to 3 WR spots. He’ll have some crazy games here and there, but if you don’t know when they’ll happen he might as well be like Tavon Austin. My confidence is severely shaken.

Kenny Stills becoming the truth in New Orleans: A late round flyer not panning out happens a bunch. But I’ve been driving the Kenny Stills bandwagon since before mini-camp! Without knowing the guy at all I want him to succeed so bad I can feel it. When he dashes down the field I can be heard yelling at Drew Brees to sling it to him. Stills has even shown up as my low value flex position in DFS leagues this year to no real luck. So believe me when I say I’m rooting for him, because I’ve put money behind it 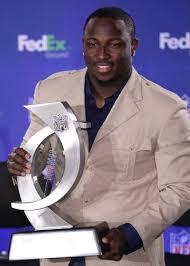 LeSean McCoy being the Safest Fantasy Draft Pick: UGH it’s definitely the offensive line, yeah, they’re the problem…but Sproles is running pretty well. WAIT it’s SPROLES, he’s what’s robbed the golden boy of fantasy…but he’s not really stealing touches that McCoy would have had. It’s Chip??? Nah that’s probably not it. McCoy will find his groove, fantasy owners will just have to tough it out, but when you draft a guy first overall you don’t expect to have to tough out the first few weeks, that’s not what you’re paying for. Whatever hasn’t been clicking will start soon, you just have to make sure your team is still breathing when it does.

Reuben Randle being a TD machine in NY: Now he did just have his best game of the young season, but with OBJ returning and Donnell looking better every game I just don’t know if Randall’s ascension into the 12 TD club will happen. The only thing going for him is that OBJ is under 6′ and that will keep Randle on the field in the redzone. That is why I hereby state that I reserve the right to have this last one stricken completely from the public record. It may not be used against me in bar bets, tweets, or good old fashioned trash talk.

So there you have it the 5/6/5 fantasy outcomes that I am washing my hands of. Everything once looked so great, but now I just can’t hope like I did a mere 5 weeks ago. Flowers wilt, relationships crumble, and fantasy players disappoint. These are facts of life that we all must accept.

I hope you’ve all enjoyed this.

As a reminder if you have any waiver, trade, or lineup questions you can tweet me @TheFantasyForce