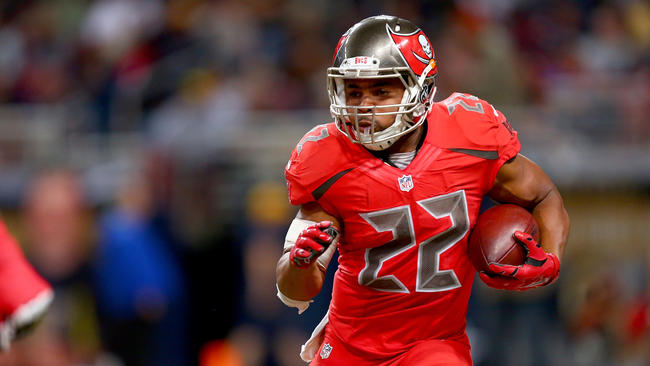 There’s a lot to like about incoming rookie Ezekiel Elliot. Great hands, great change of direction, great burst through the line. But he’s not who the Dallas Cowboys should be looking at on draft day. So clearly I’m about to extol the benefits of the cowboys taking Derrick Henry in the 2nd round right? Nah

I’m no hardcore NFL Draft guy, though I might try my hand at a mock this year for fun, but I think the best move for the Cowboys right now is to draft defensive talent and go after a RB in free agency. One specific RB…Doug Martin.

Yeah so it’s not the most original or outlandish thought, the top FA RB signing with the league’s best OL but sometimes you just gotta Occam’s Razor (or lex parsimoniae for my friends who took Latin in school) these things. So to really flesh out why Martin should be the guy for Jerruh lets take a look at the Cowboys.

The absolutely BONKERS offensive line (Smith, Martin, Frederick, Free, Collins) to open up running lanes and protect the QB. One of the game’s premier receivers right in the prime of his career with a competent #2 on the other side of the field. A great, albeit aging, TE that would put up better box score stats if he wasn’t so good at blocking. And last, a solid QB that at 36 can see the light at the end of the tunnel of his career.

On the other side, Byron Jones and Barry Church make an interesting safety combo, one run stopper, one deep safety. Brandon Carr will most likely be gone, leaving a hole at corner in addition to the upgrades that were already needed. Linebacking corps that are beginning to show their age. With a defensive line that could use a little oomph up the middle.

The Cowboys offense is built on a win now mentality but the defense could use some attitude, and not a, shove a coach, throw a woman down on a pile of guns attitude. A beneficial one. If he’s not gone at #3 I think the ‘Boys should sprint to the podium and add Deforest Buckner. While I don’t think his best fit is as a defensive tackle Buckner moved all around the line at Oregon proving to be a nuisance Centers, Guards, and Tackles alike. And instead of Henry in the 2nd I like another backfield addition, a defensive one. Someone like Will Jackson would make a nice add across from a hopefully healthy Orlando Scandrick.

With a more balanced roster the Cowboys can do their defense one last favor by adding The Muscle Hamster.

A more stout running game leads to more downtime for a defense. And if you don’t think that matters ask Eagles defenders how they’ve enjoyed the past few seasons. More time on the sideline means more adjustments which if they Cowboys start to skew young on D, would be more valuable than metrics can show.

Last year Doug Martin displayed the combination of vision and decisiveness that would be an incredible addition to the Dallas roster. More so he has this burst at the LOS that teams covet from their RBs. One moment he’s even with the Center and Guard, the next he’s 4-6 yards downfield making contact with a LB and falling forward to finish his run. Even on pitches Martin can and will turn upfield at the first sign of a hole.

With 33 catches last year Martin was underused in the passing game with the Bucs coaching staff seeing what they had in Charles Sims. While Lance Dunbar would still be around in Dallas to steal some looks, Doug Martin could be more involved in the offensive gameplan all around. Dallas lacked the presence of a threatening run game and that combined with the loss of Tony Romo had the team go 1-11 while searching for an answer.

Martin’s skill set will keep edge defenders honest, which helps keep Romo upright. His power running style fits in perfectly with what the Cowboys have in place on their line, and in their playbook. Opposing teams can’t load the box because Dez can beat them over the top. And because they can spend their picks on defense, Doug Martin makes the Cowboys team complete. We just saw the blueprint for winning with an aging QB, and while we know Dallas won’t look like Denver on defense, they won’t look like them on offense either, and that’s a good thing.

Running backs have been undervalued in the NFL recently, and coming off a hot season Doug Martin could be a big part of the entire position coming back. Doug ain’t Funnie, but a pairing with Dallas is as good as Patty Mayonnaise.